The Rest of the Christmas Story

Christians usually leave out the "rest of the story" from the Christmas story. I am not talking about the fact that it will ultimately lead to Good Friday. While we tend to tell the Christmas story in an overly picturesque manner, Christians are well aware that the Christmas story will eventually lead Jesus to the cross. The issue that I will discuss here and what most Christians fail to remember is that Jesus' family had to flee the country soon after the birth.

This is my fourth and final post about the Christmas story. The previous ones were on Advent, Christmas, and Epiphany. I have previously discussed that what we know as the Christmas story is a mash-up or combination of Matthew's and Luke's accounts as they are only two Gospels that have any birth of Jesus accounts.  Luke has the journey to Bethlehem, the manger scene, and shepherds. Matthew has the visit of the Magi or Wisemen. The Flight into Egypt is only contained in Matthew and is a continuation of the Magi visitation. Luke's birth story also includes the circumcision and naming of Jesus and his presentation at the Temple in Jerusalem (see Luke 2:21-38).  Matthew does not contain these accounts, but presumably, they happened before the family had to flee to Egypt.

Here we will focus on Matthew's account of the Christmas story. In their search for whom the star had pointed, the Magi had first gone to Herod asking where the baby who was to become King of the Jews was to be born. Herod's advisors gave them advice on where to look, and Herod told them to return after they found the child so that he could then go and worship the child. However, after they found the baby Jesus in a house in Bethlehem, a dream warned them not to return to Herod. So, they returned to their land by another road.

Of course, Herod had no intention of worshiping this "supposed" King of the Jews. He was King of the Jews (duly installed by Rome). The story is a reminder to Christians that if Jesus is who we claim him to be, that he will always be a threat to the powers that be. No matter how good we think our nation is and how much we love our country, in some ways, it is still always "Rome." It means that for Christians, our first alliance must always be to God and not our country. We should not easily mix "God and country" because there will always be tension between them.  Moreover, every government expects that it be the first loyalty of citizens, which is unacceptable to God's people.

God knew the threat that Herod posed to the child Jesus. And so, Joseph received instructions to take Jesus and Mary and flee to Egypt. While scripture does not say so, this is most likely where those impractical gifts that the Magi brought become useful. This is a poor peasant family. How could they afford to travel to Egypt and then remain in a foreign land for an extended time? No doubt, these gifts allowed them to finance this endeavor.

Why Egypt as opposed to another land? It is because Egypt, along with the Greeks and Hebrews, had the ancient concept of the "right to asylum" by which it would protect people who were persecuted by the government of their homeland. Most likely, Joseph, Mary, and Jesus had to apply for this protection when they arrived in Egypt.

Flight into Egypt by Henry Ossawa Tanner (circa 1916-1922). Courtesy of the Smithsonian American Art Museum (https://americanart.si.edu/artwork/flight-egypt-23652) which states "The story of the Holy Family fleeing Herod’s wrath was a favorite of Tanner’s, who created as many as fifteen works on the theme. In this painting, Mary and the donkey are barely discernible, with the suggestion of a figure representing Joseph behind them. Moonlight illuminates the path for the family to follow. Tanner’s own experience of racism in the United States, which motivated him to move to Paris, may have led him to identify with the persecuted Holy Family."

The Christian Church later adopted the concept of asylum. An asylum seeker could find refuge in a church, on church property, or in a bishop's home. The Council of Orleans codified this practice in 511. Over time, western nations adopted the church's practice into their national law protecting persecuted people from other lands. In 1948 the United Nations Universal Declaration of Human Rights enshrined the ideas stating, "everyone has the right to seek and to enjoy in other countries asylum from persecution."

Recently, there has been discussion about those seeking asylum in the United States. Some of the same Christians who claim to want to make America into a Christian nation have wished to put extreme limits on the U.S. asylum program if not eliminate it. I suspect that many do not know the history explained above. Christians should be exploring how to live out the Christian duty to welcome the stranger. The right of asylum protected Jesus, and consequently, Christianity from its very early days has seen providing asylum as a duty of Christians.

Once Herod discovered that the magi had tricked him and not returned to reveal to him the child's identity, Herod took a terrible action. He sent his soldiers to kill all the children age two and under, in and around Bethlehem. Consequently, we now know that the threat to Jesus was genuine, and that is why it was crucial to get Jesus to asylum in Egypt. The story also reveals what rulers will do to keep power. While it may not be a slaughter of children, we may see parallels in what contemporary leaders will do in their attempts to remain in power.

The early church developed the Feast of Holy Innocents to remember the massacre of these children. It is celebrated by Western Church (almost exclusively by Catholics) on December 28 and by Eastern Churches (Orthodox) on December 29. I am not sure how those became the dates for the celebration. Perhaps it was an attempt, like this post, to remind Christians that this is part of the Christmas story.  However, I think it is an unfortunate date because the event does not occur until after Epiphany (the arrival of magi) which is celebrated on January 6. It would have been better if the church calendar had placed the date for this remembrance after January 6.

Initially, this feast day was focused on martyrs and recognized these children as the Christian Church's first martyrs. It also focused on all the martyrs of the church now over the two millennia of church history. Consequently, it is a good time for us to think of those who have died for a cause, be it within the Christian faith or not. Who might you want to remember and lift up as we explore the story of the massacre of the innocents?

Unfortunately, over time, the Feast of Holy Innocents transformed into one of the "feast of fools" days in the church calendar. It became a kind of "children's day," a day of merrymaking for children, in which children got special rights that they did not usually have. For example, in some places, a boy would be elected bishop for the day, parents would surrender power, and in monasteries, the youngest member became the abbot or abbess for the day. While one can see the connection to the original purpose in that letting children be children for the slaughtered children who never got to be children, I wonder if the problem of having such a sad remembrance during the twelve days of Christmas had something to do with this transformation. In more recent times, the focus has returned to its original purpose and focuses on martyrs.

In general Protestant churches have not celebrated the massacre of the innocents. However, in the 1850s, Protestant Churches in the United States began celebrating a Children's Day, typically on the second Sunday in June. Children's Day predates the celebration of Mother's Day and Father's Day. Julia Ward Howe started Mother's Day (ironically, she was the writer of the Battle Hymn of the Republic) as an anti-war protest day in which Mother's vowed to never send their sons off to war again. Father's Day was started in 1909 as a complement to Mother's Day, which by then had lost its anti-war flavor. The protestant Children's Day never had a connection to the massacre of the innocents. Nevertheless, there may be a parallel with the transformation of Mother's Day from a protest day against war into a celebration of mothers. It is probably natural to prefer tame holidays as opposed to ones that challenge us.

After Herod died, God appeared in Joseph's dream and told him that his family could return to their homeland. But because Archelaus, Herod's son, was ruling in Judea, a dream warned Joseph that the area around Jerusalem (including Bethlehem) might not be safe. So, the family went north to Galilee and settled in Nazareth. Matthew tells us nothing else about Jesus' life until he begins his public ministry as an adult.

2:13 Now after they had left, an angel of the Lord appeared to Joseph in a dream and said, "Get up, take the child and his mother, and flee to Egypt, and remain there until I tell you; for Herod is about to search for the child, to destroy him." 14 Then Joseph[h] got up, took the child and his mother by night, and went to Egypt, 15 and remained there until the death of Herod. This was to fulfill what had been spoken by the Lord through the prophet, "Out of Egypt I have called my son."

16 When Herod saw that he had been tricked by the wise men,[i] he was infuriated, and he sent and killed all the children in and around Bethlehem who were two years old or under, according to the time that he had learned from the wise men.[j] 17 Then was fulfilled what had been spoken through the prophet Jeremiah:
18 "A voice was heard in Ramah,
wailing and loud lamentation,
Rachel weeping for her children;
she refused to be consoled, because they are no more."

19 When Herod died, an angel of the Lord suddenly appeared in a dream to Joseph in Egypt and said, 20 "Get up, take the child and his mother, and go to the land of Israel, for those who were seeking the child's life are dead." 21 Then Joseph[k] got up, took the child and his mother, and went to the land of Israel. 22 But when he heard that Archelaus was ruling over Judea in place of his father Herod, he was afraid to go there. And after being warned in a dream, he went away to the district of Galilee. 23 There he made his home in a town called Nazareth, so that what had been spoken through the prophets might be fulfilled, "He will be called a Nazorean." (Matthew 2:13-23 NRSV) 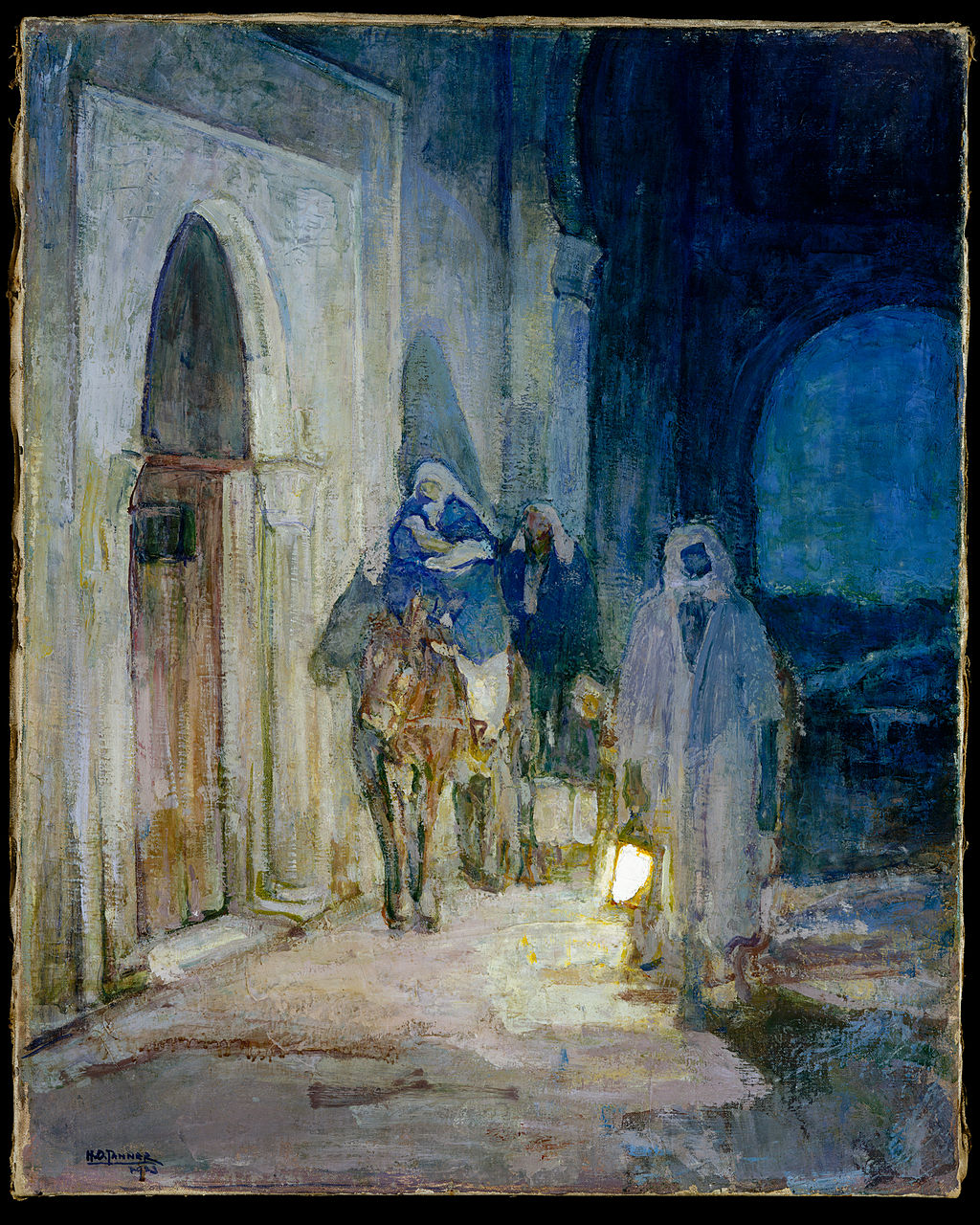 Henry Ossawa Tanner, Public domain, via Wikimedia Commons. See information under the pervious painting above for information on Tanner.

About the painting at the top of this post: The Flight into Egypt (La fuite en Égypte) by James Tissot (French, 1836-1902) circa 1886-1894. Courtesy of the Brooklyn Museum. (https://archive.org/details/brooklynmuseum-o4440-the-flight-into-egypt-la-fuite-en-gypte).

Disclosure: Some of the links in this post are 'affiliate links.' This means if you click on the link and purchase the item, we will receive an affiliate commission.
Read More